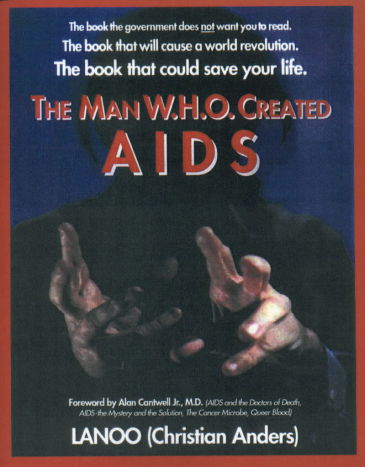 THIS BOOK TELLS IT ALL!

-AIDS created by the government.
-The cure for AIDS and cancer exists.
-Why vaccination against any disease is worthless and dangerous.
-Will we all be HIV positive soon?
-How to deal with any disease.
-Testimony of six independent doctors who reversed 300 AIDS patients from HIV positive to HIV negative.

DEAR READER, WHAT DO YOU SAY ABOUT THESE FACTS ?

- From November 1978 to October 1979, 1083 New York homosexuals were vaccinated against Hepatitis B, under the supervision of Dr. Wolf Szmuness. Today, most of these gay men are dead. They died of AIDS. Coincidence?

- From March 1980 to October 1981, 1402 homosexuals from San Francisco, L.A., Denver, St. Louis and Chicago were vaccinated against Hepatitis-B. Again, most of them died … of AIDS. Coincidence?

- During the mid-seventies, millions of Africans were vaccinated Against smallpox. Today, most of them have died of AIDS or are HIV-positive. Coincidence?

- According to the W.H.O. (World Health Organisation) & CDC (Centers for Disease Control) statistics, soon every American will be HIV-positive. Mission fulfilled, Mr. Bush (and others)?

While living in the USA Lanoo was confronted with a new challenge. On his Weekly Century, Continental and United Cable TV shows "Lanoo on the Book of Light" he interviewed Alan Cantwell Jr., M.D. and Robert B. Strecker, M.D., Ph.D. They declared on his show that AIDS is a man-made disease created in laboratories and injected in gays and blacks. Lanoo researched for over three years. All investigations led to one man and to the book "THE MAN WHO CREATED AIDS".

Dr. Jack Felder, African American biochemist, formerly with GS-7, U.S. Army Natick Laboratories, Natick, Mass., from where he left, when he discovered what was really going on there:

"I herewith give to LANOO the title "Medical Doctor", since he has greater understanding about the true cause AND CURE of diseases than most M.D.s I know."

For more information klick at the cover, please!